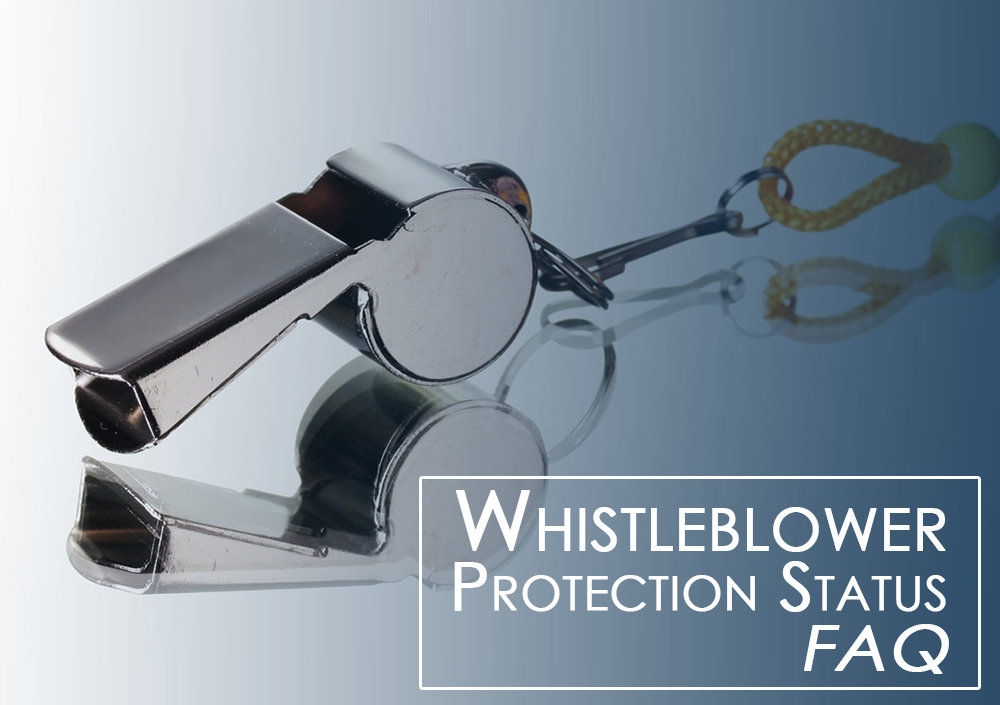 Through the hard work of countless civil rights advocates, employees and concerned citizens, the American workplace has slowly but surely become an increasingly safe, ethical, and accepting environment. However, a considerable amount of work still needs to be done to insure that today’s workplace is a safe and non-discriminatory environment.

Regardless of the industry in which you work, it is highly probable that you will either experience or witness some type of workplace injustice. Although reporting misconduct to human resources or your supervisor can help, the truth is that more drastic measures, such as filing a complaint with the appropriate governmental agency, are often necessary to rectify the situation.

The biggest barrier to such action? Intimidation. Many employees fear that reporting a violation of workplace misconduct or improprieties  will cause them personal or professional harm through some form of retaliatory action of their employer. Hopefully, the questions and answers set forth below will serve to clear up common misconceptions regarding whistleblower status for employees and help you better understand your rights as a California employee.

Where can I report workplace ethics violations?

A number of governmental agencies are dedicated to helping employees report instances of improper behavior and unsafe work environments. For example, the Equal Employment Opportunity Commission (EEOC) assists employees in filing formal complaints regarding discrimination and harassment. (Such cases can be filed in relation to race, skin color, sex, pregnancy, religion, national origin, citizen status, military affiliation, bankruptcy, genetic information, and disability.) Similarly, the Occupational Safety and Health Act (OSHA) makes filing workplace safety violation complaints easy and straightforward. Finally, the California Departments of Fair Employment & Housing, Division of Occupational Safety and Health and the Department of Industrial Relations work to insure that California employees are not victims of discrimination or harassment, work in a safe environment and fairly paid all wages due in a timely fashion.

Does my employer have a legal right to retaliate against a formal complaint?

No employer may retaliate against an employee for reporting perceived acts of workplace misconduct to a state or federal agency responsible for addressing issues in the work environment. For example, California Labor Code section 98.6 prohibits an employer from retaliating against an employee for filing or participating in a complaint for unpaid wages or overtime with the California Division of Labor Standards Enforcement. The Fair Employment & Housing Act, FEHA, prohibits retaliation against an employee for complaining about or refusing to participate in perceived discrimination or harassment. (California Government Code section 12940[h]). Lastly, an employee may not be discharged for refusing to perform work under conditions where an employer’s violation of health and safety laws would create a real and apparent hazard to employees. Cal. Lab. Code §§ 6310, 6311

Here are just a few of the most common employer actions that have been ruled instances of retaliation in the past: 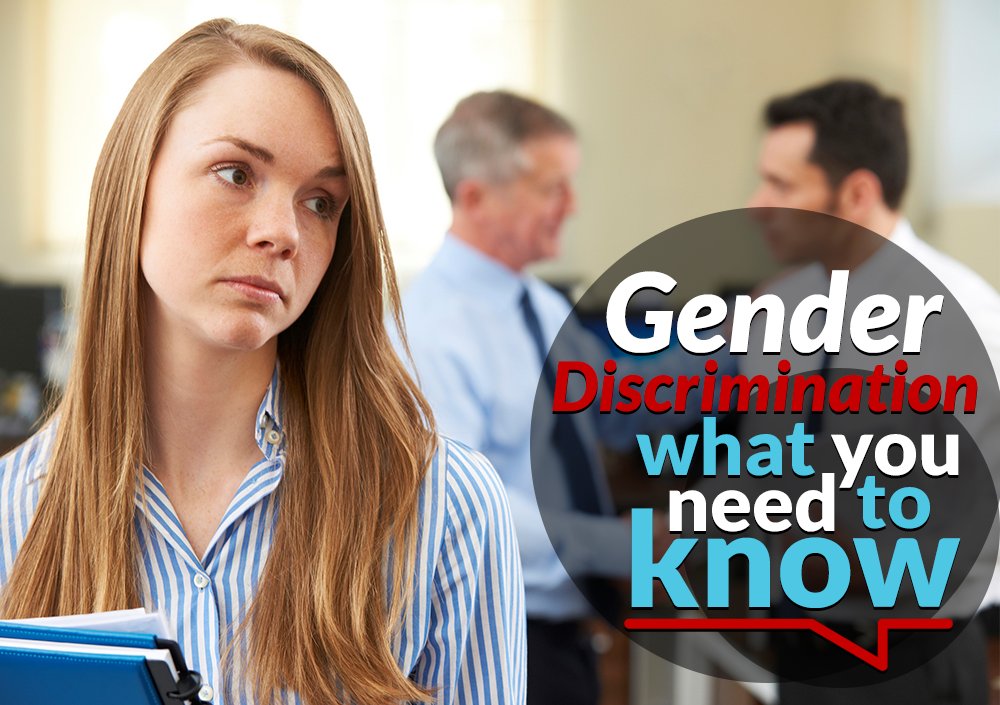 Do you suspect that you may be the victim of gender discrimination? Looking to learn more about this all-too-common workplace phenomenon? In this article, we discuss a few of the most common forms of illegal gender-based discrimination — from unfair hiring practices, to harassment, to unequal pay, and much more. Along the way, we will also present a basic overview of your legal rights and the steps you can take to defend yourself from such unlawful conduct.

Under a truly fair system, job candidates would be chosen on the basis of their talents, professional preparation, and their potential to thrive in that position. Unfortunately, many people — including millions of women — have found that, in reality, hiring practices are subject to the profound personal biases of the interviewer. (As well as the systematic repression sometimes enforced by written or unwritten corporate policies.)

The good news is that a number of laws exist on the state, local, and federal levels protecting you from this type of unlawful conduct. If an employer chooses not to hire you on the basis of your gender alone, then they have broken both state and federal law, and you have the right to defend yourself from such illegal discrimination. Under California law, an employer is prohibited from refusing to hire an individual because of their gender. (Government Code §12940[a])

Sometimes, gender discrimination is built upon a subtler — yet equally unfair — line of thinking. Family status (i.e. how many children you have, whether or not you plan on having children, and, in the state of California, whether or not you are married) must not be taken into consideration by employers when they weigh the merits of potential employees. In fact, interviewers are not even allowed to ask you these types of questions.

If you are asked about family or marital status, you can invoke your right to keep such information private, and may have a claim under either federal law or the Fair Employment & Housing Act, which has more expansive protections than its federal counterparts. If you believe that this information (or your refusal to provide this information) has been used against you in the hiring process , then you have several options available to you. This includes contacting an experienced employment law attorney, the Department of Fair Employment & Housing, and/or taking legal action in order to preserve your rights.

The state of California, unlike the majority of US states, offers strong protection against employment discrimination of LGBTQ people. Nonetheless, discrimination against members of the LGBTQ community does still occur — and studies have shown that the incidence of such discrimination is sometimes skewed more heavily against members of one gender than another. For example, a certain employer might tend to discriminate against lesbian job candidates but not gay job candidates, whereas another employer might do the exact opposite. For this reason, all employees should be attentive to all types of professional discrimination against themselves as well as their fellow employees so as to insure both a more harmonious and diverse workplace and overall society. If you suspect that you are a victim of gender discrimination, it is important to speak up for your rights, or contact an employment attorney for advice on how best to respond to the situation. . may a victim, you should speak up, regardless of what the experiences of your coworkers might otherwise imply.

Promotions and the Pay Gap.

The ethical notion of “equal pay for equal work” has been federally mandated ever since the Civil Rights Act of 1963 — yet women still earn an average of just 79 cents on the dollar for what men earn. Though a portion of this discrepancy can be attributed to differing professional and lifestyle choices, there is no doubt that a sizable percentage does indeed originate from violations of the equal pay clause. (As thousands of annual wage gap lawsuits in the state of California alone clearly demonstrate.) Fortunately, California has expanded the protections with respect to wage equality by way of the California Equal Pay Act and the California Fair Pay Act.

Workplace harassment and bullying — whether sexual in nature or not — is another issues that tends to affect women disproportionately. Again, it is important for employees to speak out against such reprehensible conduct, particularly because your employer is required to take the reasonable steps necessary to create a workplace environment free of discrimination and harassment. (California Government Code § 12940[k]) Finally, Moreover, wrongful termination lawsuits for qualified women who were cut from the payroll due to nothing more than their gender also abound nationwide. If you are interested in learning more about any of these topics or your valuable rights as an employee, then we encourage you to visit the he Perrin Law Group wrongful termination webpage, and to keep an eye out for our upcoming blog post on workplace professional harassment and bullying.

On Saturday, October 14th, 2017, California Governor Jerry Brown signed into law Assembly Bill 1008, known casually as Ban the Box. This type of legislation has been a hot topic across the nation ever since 2015, when then-president Barack Obama banned federal government job applications from inquiring regarding the conviction history of potential employees.

In the months and years since, several states and hundreds of cities enacted similar legislation — joined this October by the state of California. The idea behind these laws is creating a path for former offenders to reintegrate smoothly and successfully into society.

With over two million people in prison at any given time, there are more prisoners in the US than in any other country in the world — including China and India, both of which have populations over 4 times greater than ours. Roughly 70 million Americans have some criminal record, which equates to a third of the entire workforce. In that African Americans and Hispanics are often incarcerated at a rate in excess of five times that of whites, the box has adversely impacted the ability of minorities to obtain much needed jobs.

Clearly, giving former convicts an opportunity to reform themselves is in everyone’s best interest. Avoiding criminal activity and influences is far easier when one has access to gainful employment, for example. If former convicts are unable to earn an honest living, they are left with little option apart from earning a dishonest living, which reduces safety across the board. (And this doesn’t even begin to cover the massive economic impact that discriminating against 30% of the workforce can have!)  Unfortunately, some studies indicate that individuals are incarcerated not solely because of their crime, but because of racially disparate policies and practices.  An unwarranted level of incarceration that serves to worsen racial disparities is problematic both for the impacted group and society as a whole in terms of both the effectiveness of the justice system along with the manner in which it is perceived.

The objection that many employers and some concerned citizens are sure to raise, of course, is safety. No employer wants to hire an employee who may reoffend — and no honest employee wants to risk working in an environment where dishonesty or violence could occur. Thankfully, there are safeguards in place to prevent these types of situations.

Employers are allowed to take criminal history into account before making a final job offer, for example. The idea behind ban the box is to simply give former convicts a chance. Rather than disqualifying former offenders straight off the bat, employers are required to judge applications based upon qualifications alone — thus allowing former offenders the chance to be interviewed and considered based upon their merits. An employer could still potentially decide against hiring a former convict, but at least this new system gives them a chance.

This new law will take effect on January 1st of 2018 — so if you are a former convict who is currently searching for work, you may still encounter questions regarding your criminal history on job applications until the end of this year. Moreover, there is sure to be at least some employers who either intentionally and/or accidentally fail to complay with the new protection. If, after the new year, you do find such questions or feel that you have been the victim of any form of discrimination by a current or prospective employer, however, you should be aware that an employer’s failure to comply with this new law may be considered a form of employment discrimination.

Staying up to date on your as an employee rights is a crucial component of defending them. Learn more about how the law defends you as a worker and how we can help you defend your employee rights, call us or request a free consultation.